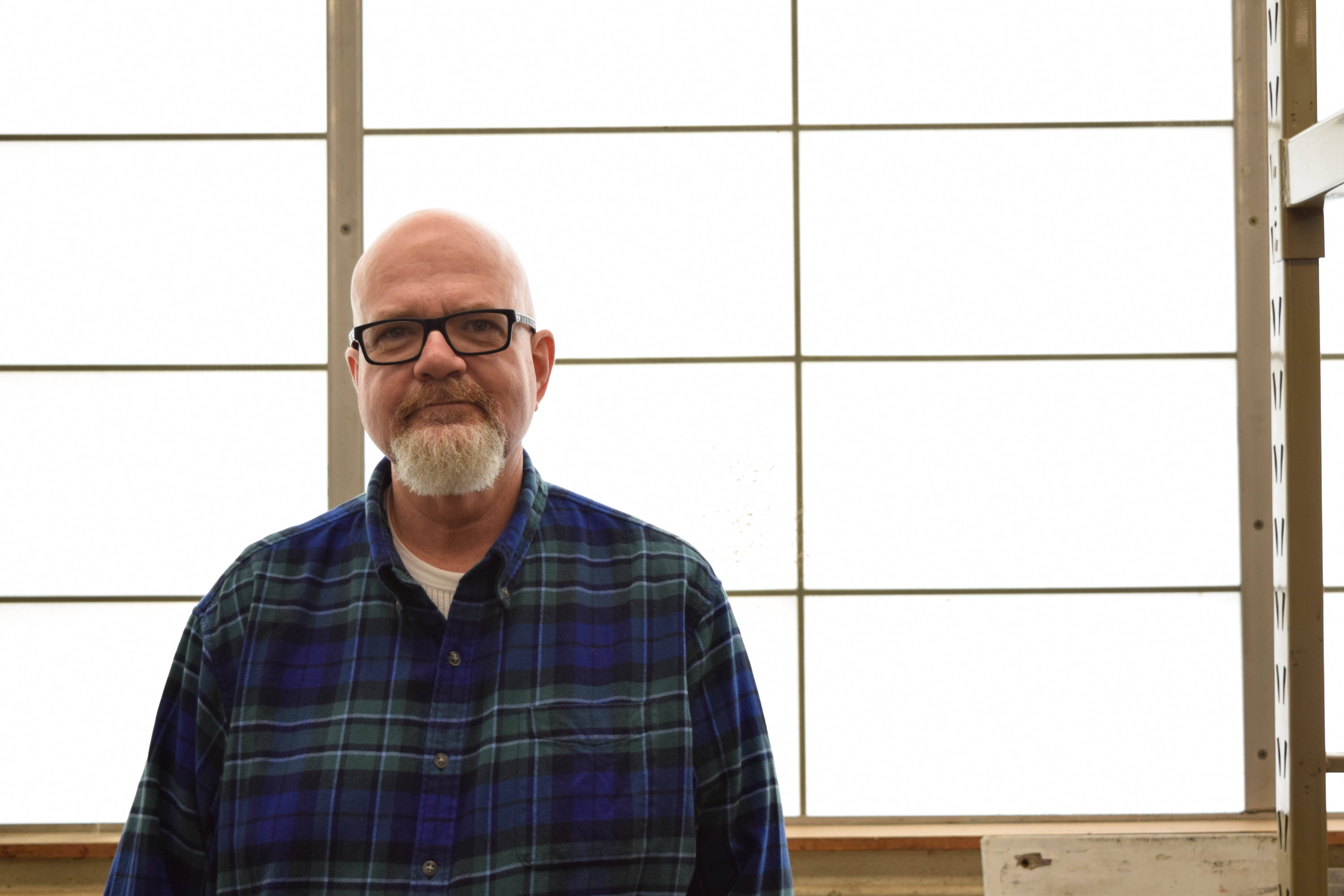 Michael McCombs has an impressive education and career that precedes his recent artistic ventures. Some of those achievements include an undergraduate degree in Portuguese and Spanish from IU Bloomington, a master’s degree in library and information science from IU Bloomington, and a master’s in international business studies from the University of South Carolina. This seems like an unlikely arts candidate, but he has found a freedom in marrying some of his past career skills and applying them to his artistic processes.

“I just started taking art classes last semester,” McCombs says. “I have always gone to museums, and I have a ‘large-ish’ art collection of monotypes, etchings, watercolors, oil paintings.”

With his mixed academic background, McCombs has started creating for himself now. After finding himself out of the business world due to restructuring, and after an interest in the allied health field also fell short, he pivoted. McCombs took time to volunteer for hospice as well as at La Casa de Amistad in South Bend.

It was around that time when he discovered photography with his iPhone.

A friendship within the fine arts department, and sharing his initial work, turned into enrolling in a 200-level photography course and a printmaking course.

“Everything I had only existed only on the phone, in bits and bytes: I had no physical object. So that’s how I started,” McCombs says. “As opposed to the business world, I don’t have to be perfect in what I’m doing now. I just have to learn something. Another distinction I found between business and fine arts is that in the business world, the acceptance of your ideas really depends on your personal status in the organization, not the idea itself. In the art world, your ideas are looked at and they look at you. ‘Do you have the ability execute?’ and they want to help you realize that idea. That to me is the wonderful freedom of over 20 years as an internal auditor where I was very rigid.”

McCombs jumped into the fine arts school as an unorthodox student, meaning he is not aiming to complete a degree program at this time, but rather to just learn and discover new ways to express himself through art.

The coming fall semester will bring in some new mediums, with silkscreen and some painting. Having already taken a drawing class, McCombs says his discovery of all new mediums has been rewarding.

“I have to take the next drawing class, but I want to start working with color and I want to get a paint brush in my hands, because I’ve not used any of these tools. I’m finding out the differences between the hardness of pencils. I had no idea about any of this. That’s the idea of simply learning for learning, rather than learning for earning,” says McCombs.

Initially worried that he wouldn’t receive the same sort of critiques on his work and technical attention with his pieces as traditional students, he has found that isn’t the experience he has had in any arts courses so far.

“I have no idea where this is going, and that’s the beautiful thing. I started out as a Portugeuse and language major, got an MLS, realized the students I worked with at the state university in New York getting business degrees were going to make more money than me, so I thought ‘I could do all this.’  So that’s when I got the MBA, and things fall out,” McCombs says. “Things in the business world fall out as they do, and you may be given an opportunity to change. I have been very lucky in that way.”