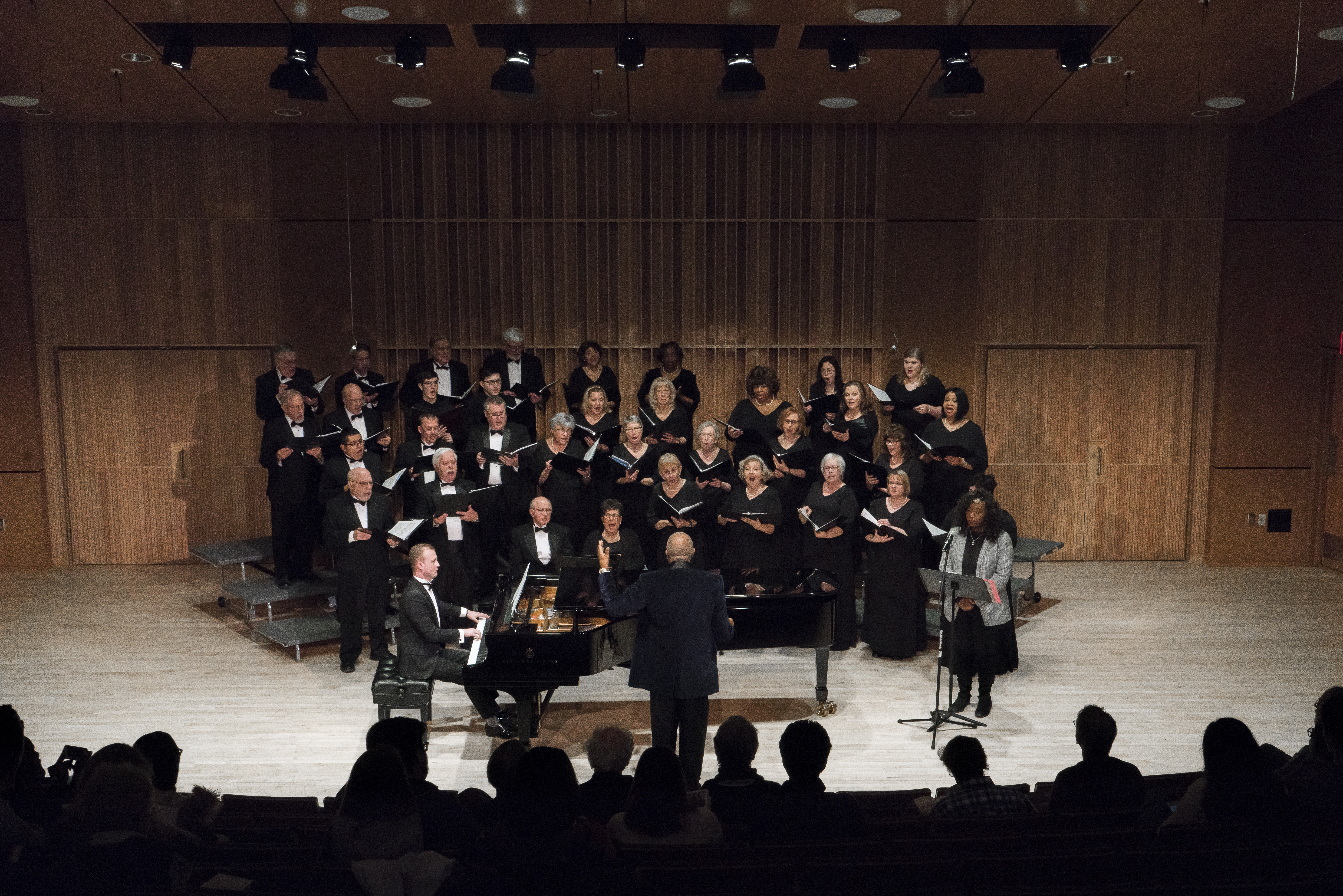 Celebrating its 12th year, the annual Black History Month concert Lift Every Voice Celebrating the African American Spirit will highlight the contributions of African American composers and performers. The event will feature singers, dancers, pianist, and the choral on Saturday February 29th at 7 p.m. The concert will be;held in the Louise E. Addicott and Yatish J. Joshi Performance Hall.

This year's performers are soprano Alfrelynn Roberts, tenor Roderick George, bass-baritone Ivan Griffin, and pianist Karl Van Richards. Ms. Roberts was a featured soloist with the choirs and orchestra of IU South Bend for a performance of Haydn Lord Nelson Mass. She has been featured with Kalamazoo Singers, Kalamazoo Bach Festival, American Institute of Musical Studies Orchestra in Graz, Austria, Kalamazoo Symphony Orchestra, Battle Creek Symphony, and Grand Rapids Symphony as well as the featured soloist for Presidents Bill Clinton and Barack Obama. Alfrelynn is the Chorus Master for the Fort Worth Opera and concluded her first season to rave reviews for the chorus in the Gershwins Porgy and Bess and Rachel Peters Companionship. Alfrelynn has been the Artistic Director for the South Dallas Concert Choir for the last four seasons and conducted the choir for AT&ampT Performing Arts' production of the Underground Railroad featuring Kathleen Battle. Alfrelynn is also the vocal/choral coach for seven high schools. She also served as the music and stage director for two different productions of Ain't Misbehavin..

Tenor Roderick George enjoys a distinguished national and international career as a performing artist and a vocal music educator. Regularly engaged as a concert soloist in major orchestral and oratorio works, he made his New York Lincoln Center debut as the tenor soloist in Handel Messiah with the National Chorale at David Geffen Hall and he was recently a featured soloist for the 2019 Gotham Sings Choral Festival and Ensemble Showcase at Carnegie Hall. An international artist, Roderick has performed throughout Russia, including solo concert appearances with the Orpheus Radio Symphony Orchestra and the Krasnoyarsk Philharmonic Orchestra. He has also made appearances at various prestigious international music festivals and venues including Festival Internacional Musica Sacra in Ecuador, La Folle Journe Festival in France, Spain Festival Internacional de la Porta Ferrada and Festival Internacional de Santander, the Cayman Arts Festival of the Grand Cayman Islands, Notre-Dame Cathedral and American Cathedral in Paris, Lensoveta Palace of Culture in St. Petersburg, the Royal Dublin Society and Wexford Opera House of Ireland, and the Spaso House of the U.S. Embassy in Moscow.

Bass-Baritone Ivan Griffin returns to South Bend after participating in this concert previously, and also appearing as soloist in the world premiere of Requiem for the Innocents by Dr. Jorge Muniz, Chair of the Musi< Department at IU South Bend with the South Bend Symphony. He returned to sing with the South Bend Symphony a guest soloist at the request of Conductor Laureate Tsung Yee a year later. He has delighted audiences in Italy, France, Germany, Spain, Switzerland, Holland, and South Africa. His operatic engagements include Lawyer Frazier in Michigan Opera Theatre Porgy and Bess, a role that he was invited to reprise during a European tour of the opera. Ivan made his Spoleto Festival USA 2016 debut in the role of Robbins in Porgy and Bess. He was also featured as the King in the world premiere of Afram you la Belle Swita by Edmund Thornton Jenkins. Additionally he has appeared as Lucien Aubry in Minette Fontaine with OperaCrole, Rev. Olin Blitch in Susannah with Buffalo Lyric Opera, Count Almaviva The Marriage of Figaro and Papageno The Magic Flute with Western New York Opera Theater. A frequent guest with New Orleans Opera, he has appeared in such productions as Madame Butterfly (Il Commissario), Vampyr (Toms Blunt), >Boheme (Benoit), Carmen (Lt. Zuniga), Traviata Dr. Grenvil and Tosca (Cesare Angelotti). His concert, Songs of A People: Music of the African-American Experience, was a feature at both Marigny Opera House and Trinity Episcopal Church Artists Series in 2015. He also had the pleasure of performing the National Anthem on November 19, 2017 for the New Orleans Saints vs. the Washington Redskins game in the Mercedes-Benz Superdome.

Accompanying the singers and performing on his own will be Karl Van Richards. Mr. Richards won the Victoria M. Griffith Concerto Competition in 2000 at age 17, making his orchestral debut playing the Grieg Piano Concerto in A Minor. He has performed as a soloist or as an orchestral pianist with the University of Miami Symphony, The Coral Gables Symphony, The Greater Palm Beach Philharmonic, The Klezmer Company Orchestra and the Boca Sinfonia. His performances and collaborations have taken him to halls, theaters, museums and even a castle. He has also been to countries including Austria, The U.S.A., The Bahamas, The Cayman Islands, The Czech Republic, Slovakia, Puerto Rico, France, Australia, New Zealand and his native Jamaica. Mr. Richards debuted the American premiere of Andrzej Dobrowolski Muzyka Na Tasme Magnetofonowa I Fortepian Solo in collaboration with the Society for Electro-Acoustic Music in the United States and has performed on (NPR) Public Radio. Mr. Richards is recipient of Certificates of Distinction from the Royal Schools of Music, London, England. He studied with Ivan Davis at the University of Miami where he earned his baccalaureate degree and was recipient of a full music scholarship, the WTMI Radio Music Scholarship and the Provost Award for study in Salzburg, Austria. He earned his Master’s Degree at Lynn University in Boca Raton under the direction of Dr. Roberta Rust and received the Outstanding Performer’s Award at graduation.  He recently completed a Master of Divinity Degree at Payne Theological Seminary in Wilberforce, Ohio.

The concert will also feature the UZIMA! African Dance Ensemble and the South Bend Symphonic Choir. Dean Marvin Curtis will conduct the ensemble. The special event is supported by a grant from The African American Fund of the Community Foundation of St Joseph County and Lexus of Mishawaka.

If you are interested in tickets, you can buy them here.